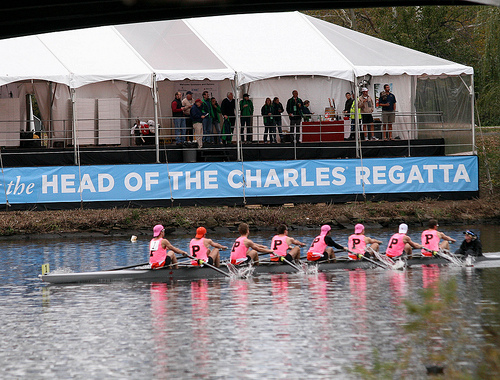 With the beautiful Boston skyline as its backdrop, this world-famous event features the world’s top crew teams streaking downriver to the roar of thrilling crowds each October. (The 2013 edition takes place Oct. 19 and 20.) High schools, colleges and clubs bring their best rowers, from novices in their early teens to veteran Olympians. And much of Greater Boston turns out to see it all.

How It All Began

Since 1965, top rowers from around the world have gathered at the Charles River for a race that has grown to become the world’s largest two-day regatta.

According the HOCR’s official website, the tradition began at the suggestion of Ernest Arlett, Harvard University’s sculling instructor. A native of England, Arlett saw the Charles as an optimal spot for the traditional three-mile regatta where rowers compete for the title of “Head of the River.” Cambridge Boat Club members embraced the idea, and the “Head of the Charles” was born.

The race begins near Boston University and ends three miles away, further west down the Charles. See a map of the course.

Many spectators gather around the starting line at the BU Bridge, or in the area between Weeks Footbridge and the Lars-Anderson Bridge, the midpoint of the race. The Weld Exhibition is a particularly lively spot, where official race sponsors staff booths offering free food and product samples.

The final races each day tend to draw the biggest crowds — and generate the most excitement. So be sure to bring along a picnic and plan to stay awhile.