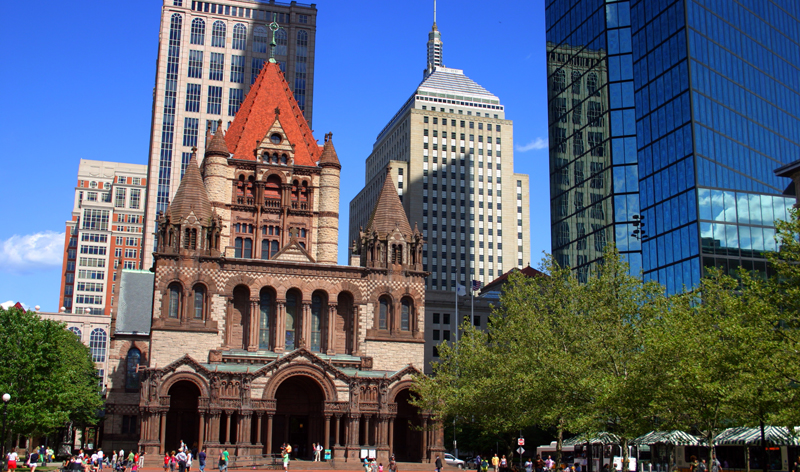 Places: the Aesthetic and Architecture of Copley Square

They say Boston is one of a handful of cities around the world where you can wake up and know, instantly, where you are. Copley Square, located a short walk from The Kensington, is at the heart of that experience. Awe-inspiring architecture, stunning skyline, a metropolitan sensibility — and threading through it all, the quiet, welcoming feeling of “home.”

The next time you have a moment to spare on your way to the office or on your morning run, stop in the very center of Copley Square. Take in the remarkable complement of architectural styles, from the magnificent arches of the Boston Public Library to the jaunty postmodernism of the BosTix kiosk.

When you pass by these beauties every day, it’s almost possible to lose sight of their splendor:

Designed by H. H. Richardson, it is considered the inaugural building of the Richardsonian Romanesque architectural style. Witness the hallmarks of the style in the building’s numerous colors (polychromy) as well as its clay roof, rough stone, wide arches and imposing tower.

Named one of the Historic Hotels of America, this Copley Landmark owes its E-shaped elegance to the Beaux-Arts style of designer Henry Janeway Hardenbergh. The building underwent an extensive renovation to mark its centennial in 2012.

Dressed elaborately in white marble, the library was designed by Charles Follen McKim to resemble a classic Roman palace. Famous as a rare example of the Renaissance Revival style in a public building, the library is the centerpiece of Copley Square.

This National Historic Landmark was designed by Charles Amos Cummings and Willard T. Sears in the Northern Italian Gothic style. Note the bell tower, multicolored stone and decorative carvings — all part of “an unusually ornate design for a New England Congregational church,” according to the church website.

Copley Square grounds you with its brilliant sense of place — a timeless history that can’t be experienced anywhere else. We love every square inch of Boston, but we have to admit Copley Square has a special place in our hearts.