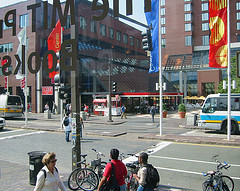 Across the River: Date Night in Kendall Square

A few stops down the Red Line, Kendall Square is waiting to provide you with the perfect night out. Kendall Square Cinema, with its indie films and plush, polished atmosphere, has always been a draw. But the fairly recent addition of several posh restaurants (some of which will even arrange for your movie tickets) has made Kendall one of our favorite destinations.

Enjoy low-key apps like bar nuts and pickles at the super-fun State Park, a new space that’s adopted a dive-bar atmosphere just for kicks. Enjoy live bluegrass along with your drink. (The beer list is excellent, and the bar offerings generous.) Not a quiet place, this is a great first stop on a first date, if you’re worried about starting the conversation. And everyone around you is having so much fun, the festive mood is sure to rub off on you.

Hop on over to West Bridge for serious, seriously good eats. (Among the many accolades earned by the restaurant, chef Matt Baudin was named one of 2013’s Best New Chefs by Food and Wine.) The staff is knowledgeable, the cocktails inventive and the menu items ultra-tasty. With small plates designed for sharing, West Bridge offers the chance to get a little cozier with your date. If you’re debating what to try, we recommend egg-in-a-jar, seafood potage and any of the toasts.

The retro vibe of the Kendall Square Cinema’s neon sign extends to lovely little details like the real butter they use on the popcorn, but frequent updates keep the interior feeling hip and current. Among the theater’s many charming features is its creative layout. With seats tapering off into narrow rows, lucky couples can find a space of their own and enjoy the movie without wearing a stranger’s runaway popcorn kernels. The film offerings themselves promise something for everyone, as this Landmark Theater runs documentary, indie and foreign films alongside occasional blockbusters.

Belly Wine Bar’s website features a quote from an 18th century French gastronomist, Jean Anthelme Brillat-Savarin, proclaiming that “dessert without cheese is like a beauty with only one eye.” While that may not be the most appetizing invitation, you’ll forget the image once you’ve tasted a forkful of chèvre gelato or green tea crème brûlée alongside one of the restaurant’s sumptuous cheeses. If you prefer your after-dinner indulgence in a glass, the dessert wines win raves. Belly shares space with its popular precursor/sister restaurant, The Blue Room, and both offer the kind of warm, pleasant atmosphere that favors intimate conversation.

With so much to do right here in the Kensington’s neighborhood, it’s easy to stick around. But Kendall, like many other stops along the Red Line, is well worth the brief travel time. And if you don’t want to depend on the MBTA, the theater-validated parking garage offers a reasonable alternative.

We’ve done the research. All you have to do is get him or her to say yes.