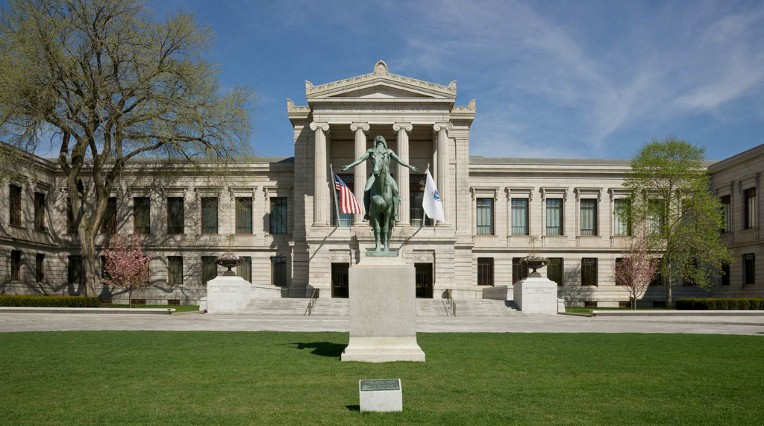 Just a short drive, cab ride or T ride away from our front door is one of the nation’s best art museums – the Museum of Fine Arts Boston. Apart from their already impressive galleries are 17 current exhibitions, so there’s undoubtedly something for everyone. Here are five that’ll knock your socks off.

You better hurry to see these gems, as the exhibition closes on March 8, 2015. This fun exhibit features designer gowns and exquisite jewelry from Hollywood in the 1930s and ‘40s. The extraordinary gowns and jewelry once worn by famous figures are considered a big reason the era was so brilliant. The exhibit includes photographs, film stills, and fclips capturing the style of the silver screen era.

For decades the names Jean and Fred Sharf have been synonymous with the MFA. “Gift of Jean S. and Frederic A. Sharf” are responsible for hundreds upon hundreds of donations in the galleries. Fred has “forever been fascinated by the great speeding up of life that occurred in the middle decades of the 20th century.” For the first time, the MFA has gathered the planes, trains, and automobiles of Fred’s in one place.

Gustav Klimt—considered one of the most important artists of the early 20th century, will be showcased at the MFA for the first time in its history, as Adam and Eve (1917–18) will be on loan from the Belvedere Museum in Vienna. The work will be “juxtaposed with the MFA’s life-sized study of a nude couple, Two Nudes (Lovers) (1913), painted by Klimt’s Viennese friend and colleague, Oskar Kokoschka.”

This exhibition offers an intense study of ceramic art from the Arts and Crafts movement to Midcentury Modernism to Studio Craft and contemporary practice. Featuring more than 70 works organized into three thematic sections: Sculpture and Abstraction, Nature and Landscape, and Surface and Decoration, the exhibit leaves nothing out. Many of the works have never been on display in any museum, with the majority making their MFA debut.

Rich visual cultures of China have produced different images of women in accordance with the fashions, styles, aesthetics, and concepts of beauty. Works that today seem to be modest depictions of beautiful women may have been considered highly suggestive when first created. This exhibit includes paintings, prints, posters, and photographs of women by Chinese artists from the 11th through the 20th century